Two Flight Attendants In Court After Smuggling R46 Million Worth of Cocaine Into Hong Kong. Two South African Airways flight attendants were in court after allegedly being busted for smuggling cocaine that is worth an estimate of R46 million into Hong Kong.

Two South African Airways flight attendants were in court after allegedly being busted for smuggling cocaine that is worth an estimate of R46 million into Hong Kong. The South African Airways spokesperson, Tlali Tlali, confirmed with the SABC that two employees were apprehended. “We confirm that two of our employees have been arrested in Hong Kong on suspicion of being in possession of drugs,” says Tlali Tlali.

The two employees were being employed on two different flights between Johannesburg and Hong Kong, they were apprehended by custom authorities. The South African Airways spokesperson says that the two flight attendants were apprehended separately, he went on to say that they have been to court and they are still in custody. The customs and excise department in Hong Kong had started a special exercise they call ‘Bullseye’. The customs want to fight cross-boundary drug trafficking acts via passenger and staff channels. The custom authorities confiscated over 18.3kg of supposed cocaine, that is worth approximately R46 million on the 22nd of September and 24th of September.

The woman was arrested on Monday at a hotel in Hong Kong after the customs officials found 12kg of supposed cocaine inside two plastic bags and on Thursday they arrested the man after they found about 6.3kg of supposed cocaine. The South China Morning Post says this is “the largest haul of its kind in the past decade.” Moving a dangerous drug in Hon Kong is a serious offence under the Dangerous Drugs Ordinance, the maximum sentence for trafficking is a fine of R9.7 million and life in prison. 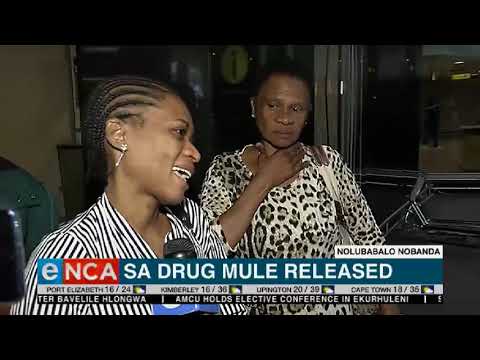 Nobanda has hinted that she plans to use her experience to raise awareness and stop other young people from falling into the same trap.

She expressed her gratitude to South Africans for their support.

“It’s good to be back home, I want to thank all South Africans for supporting me throughout the eight-years,” Nobanda said.