American rapper, Cardi B had a blast after her wonderful musical performance at Livespot X Festival as she ended up getting drunk at the after party.

The rap star had taken to her official Instagram story to reveal that she had lost a lot of energy and needed to take some nap after the herculean task.

In a new video, the Grammy award-winning rapper, who was already drunk, wondered how the small bottle of stout she drank had a huge impact on her.

“Nigerian beer is too strong, it’s like they add molly inside, I only took 1 bottle of beer and I feel fkdup” she lamented before she passed out at the backseat of her ride.

Celebrity barman, Cubana Chief Priest revealed that singer, Davido had instructed him to give the rapper 20 bottles of champagne worth N7M all the way from Barbados.

The American rapper, however, only took a bottle of beer and a little champagne before she started feeling dizzy.

The Minister of Works, Power and Housing, Babatunde Fashola, has said that our roads are not as bad as they are portrayed, and, well, Nigerians are not having it.

Punch reports that Fashola made this comment shortly after the Federal Executive Council meeting, where ₦58.4billion was approved for the construction of Bida-Sachi-Nupeko road and the Nupeko-Patigi Bridge across River Niger, linking Nupeko and Patigi in Niger and Kwara states.

Twitter users have begun to share photos of the very many bad roads across the country, imploring the former Lagos State governor to take a road trip.

I bet Fashola to take Lagos to Ilorin road in a public transport. That time we will know if Nigeria road is bad or not

How will he know if the roads are bad, they said, if his primary route of Lagos to Abuja is plied through the air?

How is he supposed to know? Does he ply any of those roads? His primary route which is Lag-Abj, he does via air, so what is he talking about.
Fashola has now developed a reputation for talking nonsense and outright rubbish all the time.

See what Nigerians have to say:

Fashola: Our roads are not as bad as they are portrayed

Addressing state house correspondents on Wednesday, the former Lagos state governor said most road projects in the country would have been completed 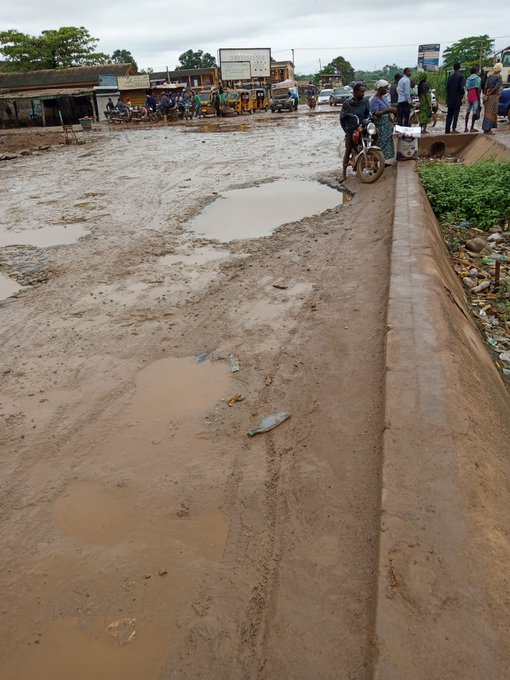 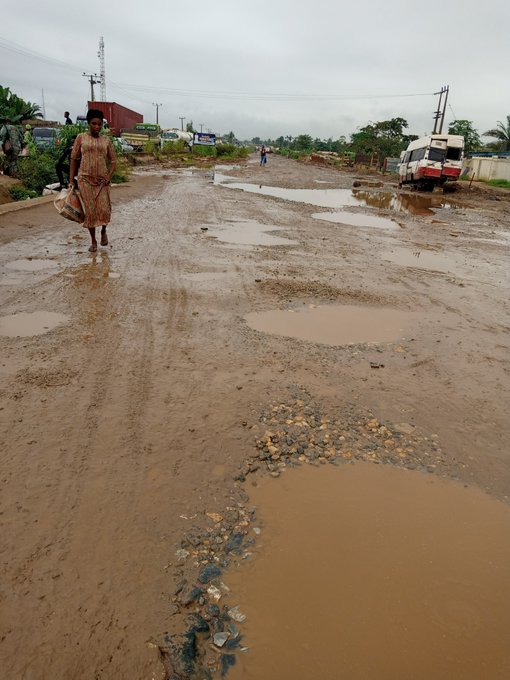 UNTIL NIGERIANS HIT THE STREETS AND DEMAND TO TAKE THEIR COUNTRY BACK, THE NATION IS GOING NO WHERE GOOD UNDER THIS APC egbekegbe GOVERNMENT

Fashola always like to hallucinate .
Rt till it get to hon. Min of work. 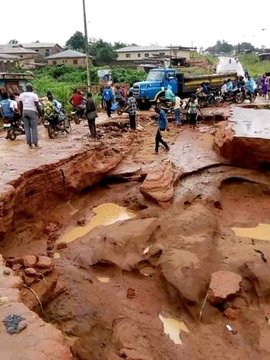 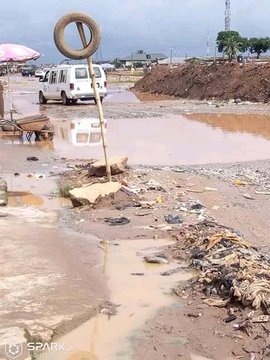 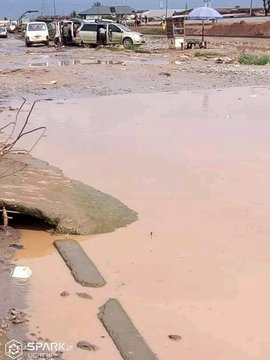 This is agbor road to warrior
Then from warri to Benin dead road
Fashola please be mindful of your words.

This is Abuja -Jos road. Guys please, retweet till it get to Fashola. He need to see this. 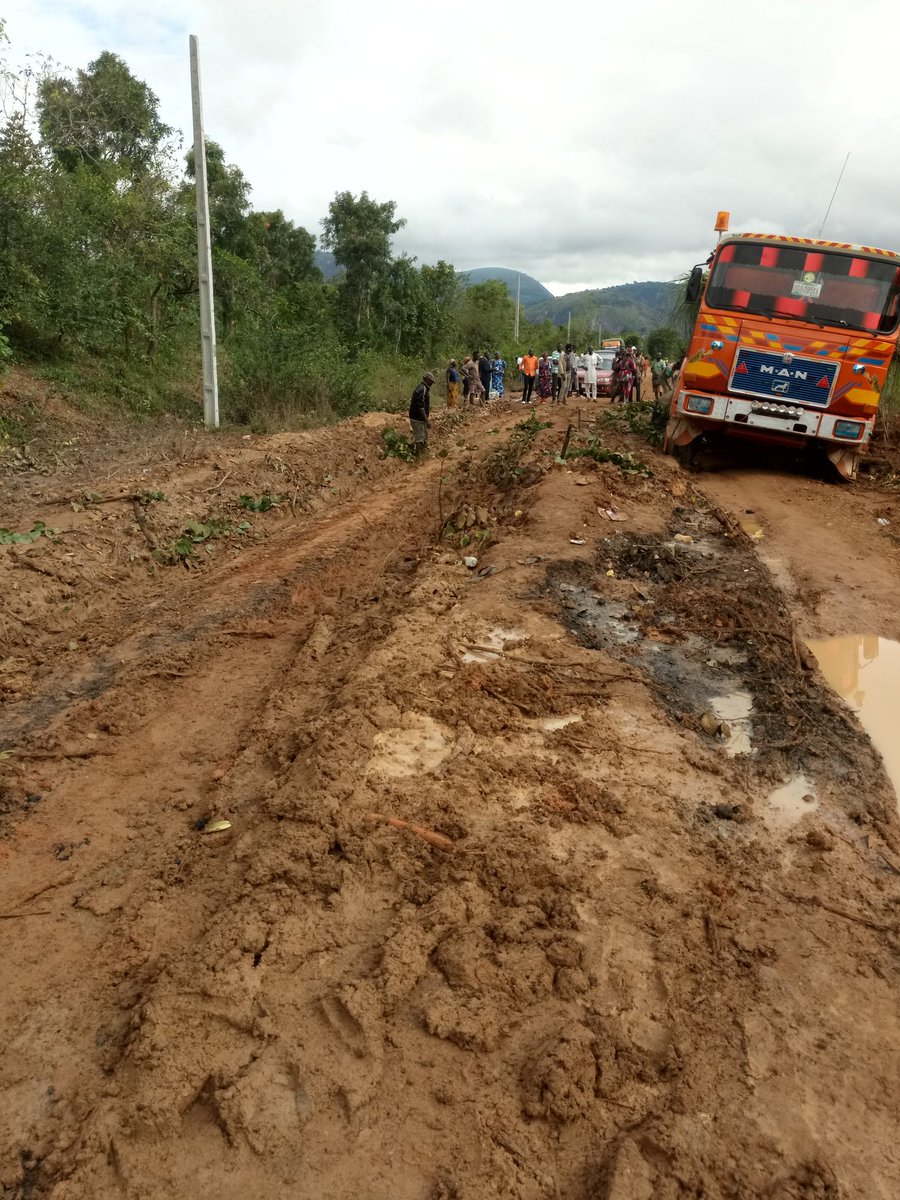 This is Abuja -Jos road. Guys please, retweet till it get to Fashola. He need to see this. 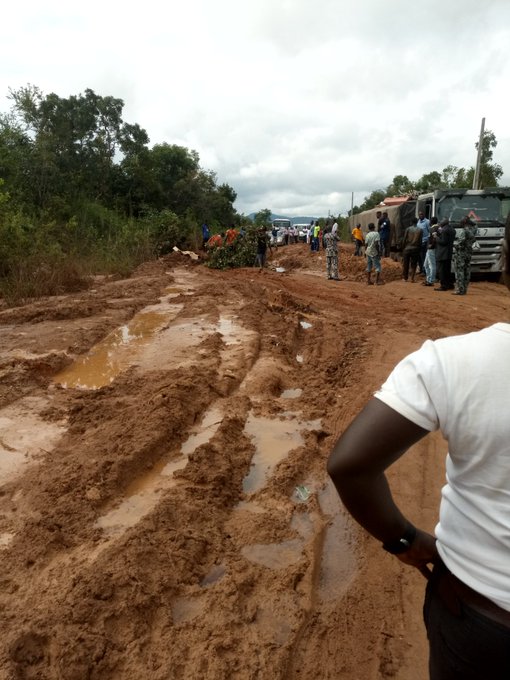 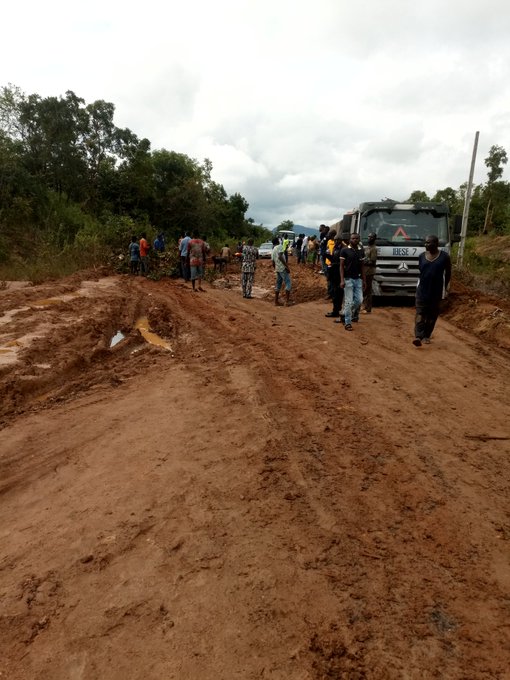 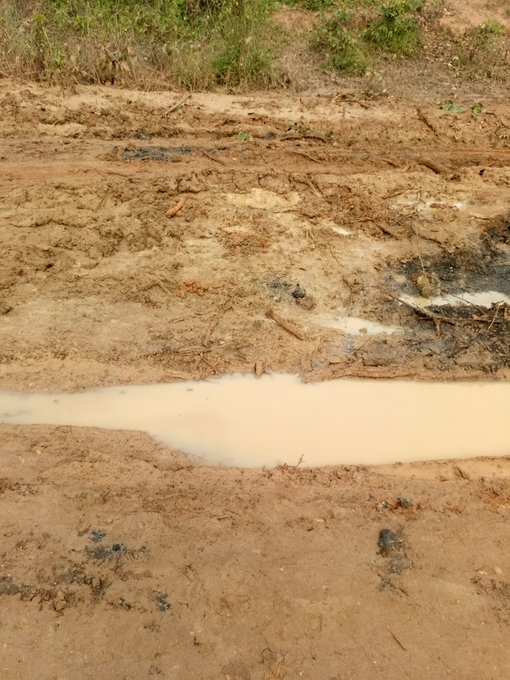 This is why they are pushing for the social media Bill so when they say rubbish we won’t be able reply their nonsense..Mr Fashola can you live in an Environment like this? 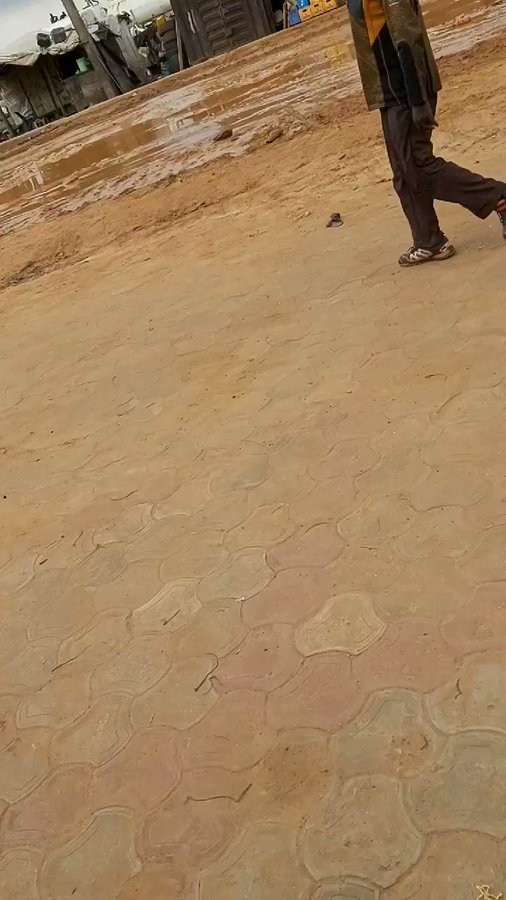 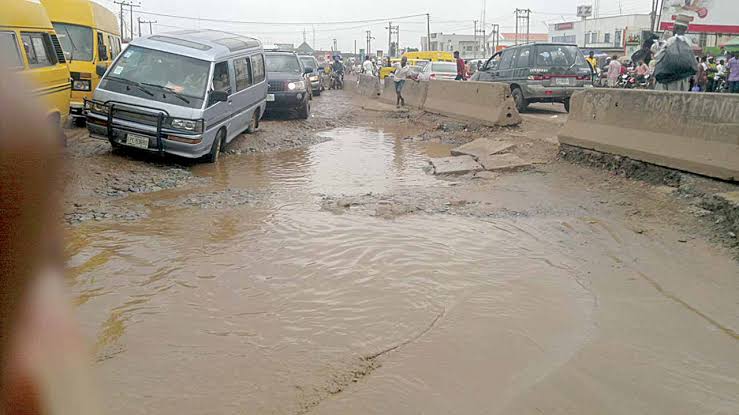 Hello guys how about we do a trend on the roads in our areas to respond to Fashola. Here’s my this is iyanaiba busstop inward iba-lasu road https://twitter.com/vanguardngrnews/status/1192347527800078336 … 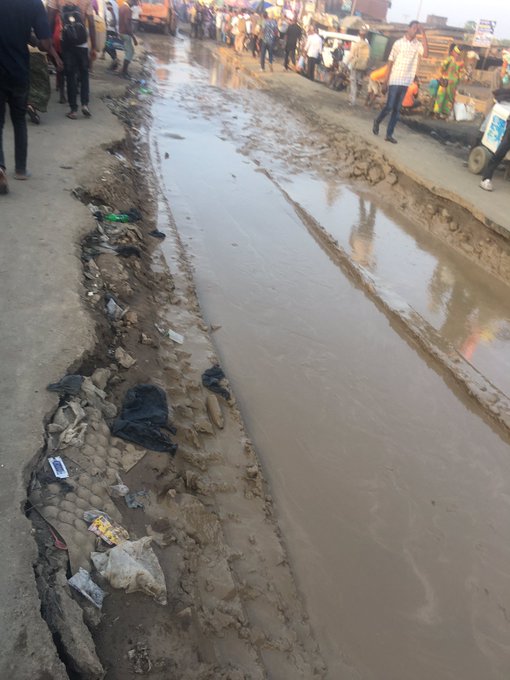 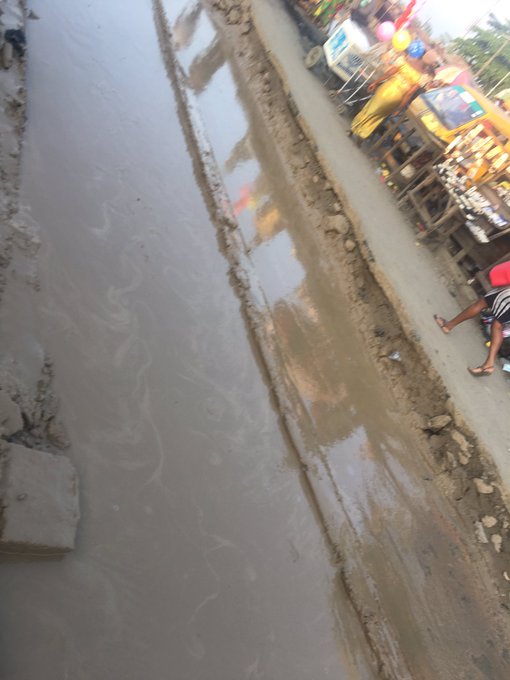 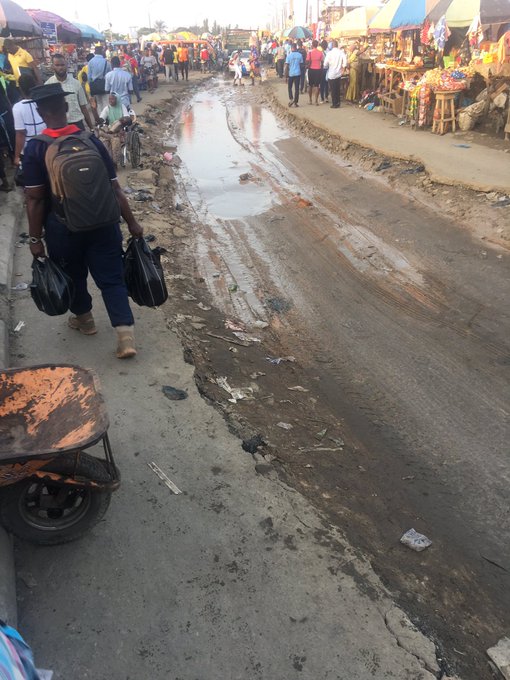 The Minister of Works and Housing, Babatunde Fashola, said on Wednesday that Nigerian roads are not as bad as they are being portrayed. He insisted that reports on the poor state of roads in the country are mere hype.https://www.vanguardngr.com/2019/11/nigerian-roads-not-as-bad-as-being-portrayed-fashola/ …

President Cyril Ramaphosa has formally apologised to Nigeria for xenophobic attacks on its citizens in South Africa.

He said the ugly incidents did not represent the values that his country cherished.

The head of South Africa’s special envoy Jeff Radebe tendered the apology on behalf of the South African leader when he visited Nigeria on Monday.

“We met with his Excellency President Buhari to convey our president Ramaphosa’s sincerest apologies about the incidents that have recently transpired in South Africa. Those incidents do not represent what we stand for as a constitutional democracy in South Africa and the president has apologised for these incidents.”

President Ramaphosa, according to Radebe, said the attacks provided a good opportunity for African leaders to tackle unemployment, inequality and poverty on the African continent.

“We believe that the crisis must serve as an opportunity for us to make sure that the scourge of unemployment, inequality and poverty in Africa must be attended to by our leaders.”

Nollywood Actress, Moyo Lawal recently took to her Instagram page to share an innocent video and a photo of herself holding 2 cucumbers, but little did she know what her fans and followers had in stall for her.

The actress, who is fond of sharing sultry photos of herself, captioned the video:

Nigerian took to her comment section to react to the post with different thoughts running through their mind after all ‘body no be firewood’.

The 2019 edition of the Global Peace Index(GPI) has placed Nigeria among the least peaceful nations in the world, retaining its position in the previous year – 148 of 163 countries. In sub-Saharan Africa, it ranked 40 out of 44 with Mauritius topping the list and South Sudan ranking least.

Produced by the Institute for Economics and Peace (IEP), the GPI is the world’s leading measure of global peacefulness using three thematic domains which are the level of Societal Safety and Security; the extent of Ongoing Domestic and International Conflict; and the degree of Militarisation. The GPI covers 99.7 percent of the world’s population, using 23 qualitative and quantitative indicators from highly respected sources.

The organisation revealed that overall peacefulness increased slightly, with the likes of Ukraine, Sudan, Egypt, North Macedonia and Rwanda showing significant improvements in peace. However, the 2019 GPI showed “conflicts and crises that emerged in the past decade remain unresolved” but some progress has been made towards achieving peace.

“The average level of global peacefulness improved very slightly last year on the 2019 Global Peace Index (GPI). This was the first time that the index improved in the last five years. The average country score improved by -0.09 per cent, with 86 countries improving and 76 recording deteriorations,” the report read.

Whereas some other African countries such as Tanzania, Egypt and Rwanda improved in the rankings, the most populated country in Africa remained stagnant even though its score rose by 0.025, from 2.873 in 2018 to 2.898 in 2019.

The slight increase in score is down to it being among the countries where the number of deaths decreased. Nevertheless, that was not enough to see Nigeria ranked outside of the top five least peaceful countries in the region alongside conflict-ridden Somalia, the Democratic Republic of the Congo (DRC), Central African Republic (CAR), and South Sudan.

One of the factors behind the country’s poor turnout is climate change. The report showed that eight of the 25 least peaceful countries have ten percent or more of their population in high climate hazard areas, amounting to 103.7 million people at risk. These countries are South Sudan, Iraq, Libya, DRC, Sudan, North Korea, Nigeria, and Mexico.

“The impacts of a lack of water has also affected conflict dynamics in Nigeria. Lake Chad, a major source of fishing and farming livelihoods, lost 90 percent of its surface area in the past 40 years due to climate change and environmental mismanagement,” the GPI stated. In other words, climate change can indirectly increase the likelihood of violent conflict through its impacts on resource availability, livelihood security, and migration.

Other resulting negative implications of climate change are unemployment and food insecurity, which contributes to Boko Haram’s successful recruitment of unemployed youths in the area, further fueling insurgency and instability.

Moreover, Nigeria is faced with problems such as economic stagnation, piracy and an increasing rate of suicide, the latter arising from what the report describes as an increase in “experiences of sadness, stress, and worry” by the people, regardless of peace levels.