Trump said that sending people back to work during the coronavirus epidemic is no big deal because people also die from the flu and car accidents.

Trump said during a Fox News virtual town hall, “Look, we lose thousands, I brought some numbers here. We lose thousands and thousands of people a year to the flu. We don’t turn the country off. I mean every year, now when I heard the number, 37,000 people a year, can you believe that? This year we’re having a bad flu season, but we lose thousands of people a year to the flu. We never turned the country off. We lose much more than that to automobile accidents. We didn’t call up the automobile companies and say stop making cars. We don’t want any cars anymore. We have to get back to work.” 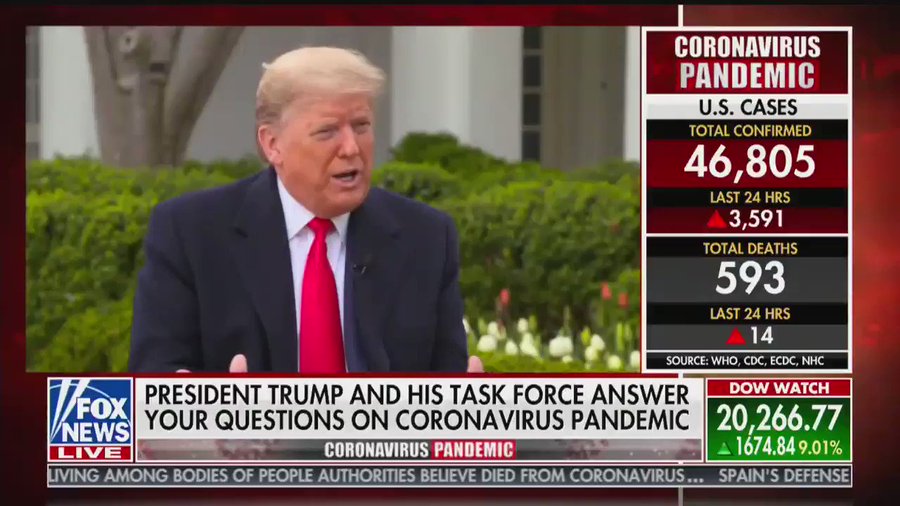 1,456 people are talking about this

Trump is suggesting that the coronavirus is no big deal, some people are going to die, so that shouldn’t stop the country from getting back to work.

The big thing to remember is that Donald Trump doesn’t have the power to lift the state restrictions. He can talk about reopening the economy, but there is nothing that he can do to force the states to lift the public health restrictions.

Trump is jeopardizing American lives because he is worried about his reelection campaign. The recession is coming no matter what Trump says, but the rhetoric that the president is spreading is dangerous and will get people killed.

News of the impeachment of US President, Donald Trump has elicited reactions worldwide.

Indeed, micro-blogging site Twitter, has seen a deluge of comments since Wednesday when the news broke.

The United States President, Donald Trump was impeached on Wednesday by the House of Representatives.

He was impeached for abuse of power and obstruction of Congress.

The result was widely expected. However, Donald Trump still remains President. The battle now shifts to the US Senate where the case will now advance to a trial to determine his removal from office.

Donald Trump, the 45th US President, becomes the third occupant of the White House in American history to be impeached.

Equally important, Donald Trump stands accused of withholding military aid. He is also accused of a White House visit to pressure Ukrainian President Volodymyr Zelenskiy; to investigate his political rival Joe Biden and his son Hunter for his own political gain. Further, he is accused of obstructing Congress by refusing to cooperate with the impeachment investigation.

In a 10-hour debate leading up to the vote; lawmakers argued for and against two articles of impeachment alleging abuse of power and obstruction of Congress. Specifically, this was related to the president’s dealings in Ukraine.

Meanwhile, the case will now advance to a trial in the 100-seat Senate. Indeed, a two-thirds majority is necessary for a conviction. A conviction would result in Donald Trump being removed from office. Nevertheless, the Republican majority is expected to acquit the president in a trial set to begin in January 2020.

However, the White House has expressed optimism about the next phase of proceedings, despite the decisive vote by the House.

Further, a statement released by White House spokeswoman Stephanie Grisham Trump noted that; “Trump is prepared for the next steps and confident that he will be fully exonerated in the Senate trial.”

Meanwhile, Twitter has witnessed a global explosion of reactions after the impeachment. Indeed, the impeachment has remained the top trending topics on the micro-blogging site since Wednesday night.