Kanye West has avoided social media and the press as of late, but he opens up like never before in a rare interview with David Letterman for Season 2 of his Netflix series “My Next Guest Needs No Introduction.”

During the hour-long conversation, the G.O.O.D. Music mogul speaks on numerous topics including President Trump, his struggles with mental health, his parents, and his rivalry with Drake. The Daily Beastviewed the episode in advance of its May 31 premiere and calls it “one of the most coherent and engaging interviews Kanye has ever given.”

During a discussion about his lyrics, Kanye alludes to Drake, hinting that he’s not allowed to speak his name. “An artist which I will not mention, because I’m not allowed to mention him or any of his family members…” says Ye.

Kanye, who met with Trump at the White House last fall, continues to defend his support for the president. “This is like my thing with Trump–we don’t have to feel the same way, but we have the right to feel what we feel,” says Ye, who also expresses sympathy for Trump voters who are “treated like enemies of America because that’s what they felt.”

He claims that wearing his “Make America Great Again” hat is “not about politics” but rather to take away the stigma for showing support for Trump. “Have you ever been beat up in your high school for wearing the wrong hat?” he asks. When Letterman asks who is doing the bulk of the bullying in America, he replies, “Liberals bully people who are Trump supporters!”

Kanye, who has been off medication for nearly a year, also discusses his battle with mental health. “When you’re bipolar, you have the potential to ramp up and it can take you to a point where you start acting erratic, as TMZ would put it,” says Ye. “If you guys want these crazy ideas and these crazy stages and this crazy music and this crazy way of thinking, there’s a chance if might come from a crazy person.” 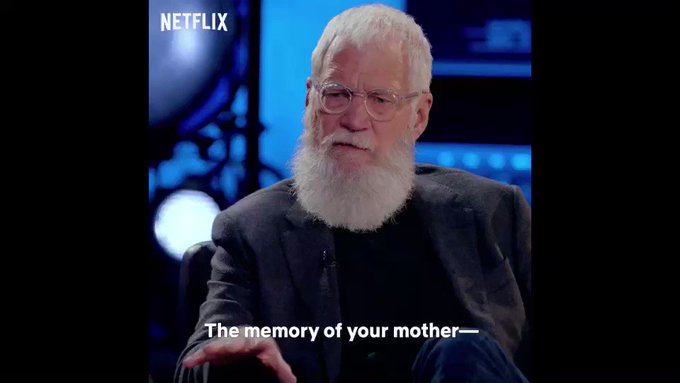 Kanye opens up to David Letterman like you’ve never seen him on My Next Guest, streaming on @Netflix May 31.

The interview takes an emotional turn as Kanye reflects on his mother Donda West, who passed away more than a decade ago. “This would have been the funnest time of her life,” says the father of four as his wife Kim Kardashain looks on. “To have those kids running around that house and being able to, like go and buy them toys.”

He also shares a memory of his mother giving him a multicolored bear shortly before she died because of his love for Takashi Murakami. “I was sort of like, I don’t want that. That ain’t no Takashi Murakami bear and stuff like that,” he says. “And then she passed a few weeks after and I did everything I could to find that bear and place that bear on top of all the Takashi Murakami stuff I had in the house.”

Letterman’s interview with Kanye starts streaming next Friday, May 31.