Real Madrid record signing, Gareth Bale has been in the headlines for various reasons this season, from failing to replace Cristiano Ronaldo, who joined Juventus in the summer of 2018, to poor goalscoring form, to leaving the stadium while the team was losing to rifts with players, now another interesting scene happened as Luka Modric asked his former Tottenham Hotspur teammate a question in Spanish.

Los Blancos assistant captain Marcelo once said Bale cannot speak Spanish, despite spending nearly six years in Spain, and it was evident when current Ballon d’Or winner Luka Modric asked him a question and he replied ‘I don’t have a clue what you’ve said’: The Welshman struggles to converse with his Real Madrid team-mates in Spanish as he is left stumped by a question from the Croatian.

Gareth Bale has been playing his football in Spain for almost six years now. The Real Madrid forward does however still struggle with the language. During a recent chat with Spanish publication Marca, Bale could not understand. Former Tottenham team-mate Luka Modric asked him a question, but to no avail.

Gareth Bale may have been living in Spain for almost six years, but he’s still struggling when it comes to the native tongue. Bale took part in a recent chat with Spanish publication Marca, during which a small group of Madrid players exchanged information about themselves in order for fans to get to know them a little better. 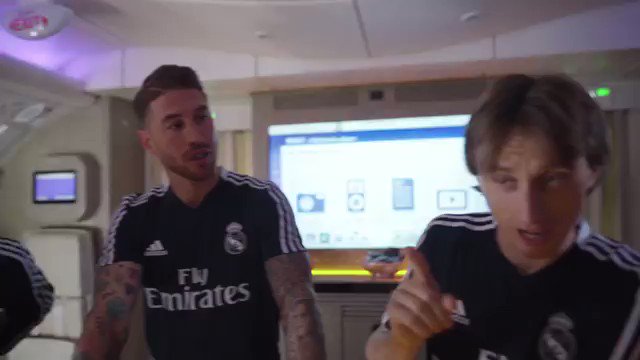 34 people are talking about this

Huddled together in the plush Real Madrid team plane, Bale joined Luka Modric, Sergio Ramos, Marcelo and Casemiro in conversation. With the others proficient in the language, Bale stood by while attempting to follow the topic of conversation. As his former Tottenham team-mate, Modric fired him the question, in Spanish, of ‘what are the three things you carry in your luggage?’ Bale looked perplexed.

‘I don’t have a clue what you’ve just said,’ replied the Welshman with a deadpan expression. Ramos attempted to save the situation by asking Bale, in Spanish, who he spends his Christmas time with. To which he responded correctly in the local tongue, ‘with my family.’

Full back Marcelo recently revealed in an interview that communication with Bale – who he sits beside in the club changing room – can often be difficult. ‘I have Bale, but Bale does not speak [Spanish] as he only speak English and we talk with gestures and I say, “Hi, hello and good wine”.’

Last month goalkeeper Thibaut Courtois revealed that Bale was a bit of an outcast at the Bernabeu. Bale’s future in the Spanish capital remains up in the air, despite word from the player’s camp that he wishes to remain with the La Liga giants.

The return of manager Zinedine Zidane has cast further doubt on Bale’s position, with the pair not seeing eye-to-eye in Zidane’s last spell. Upon his first game since returning, however, Zidane selected Bale in a 2-0 win over Celta Vigo. The Wales international repaid the faith by scoring the second goal of the game, getting a crucial three points on the board for Madrid who are desperately trying to salvage what is left of their season.